Iran is not about to collapse by Arshin Adib-Moghaddam 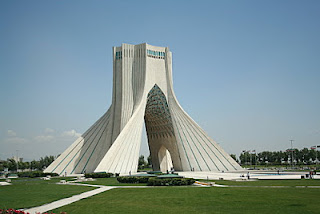 
There are two central narratives that presume the Iranian state is likely to collapse under the pressure of sanctions and/or threats of war. In my opinion, both are flawed.

The first maintains that Iran is running out of money and that its economy is teetering on the brink. This has been repeatedly presented as an argument in support of sanctions or as an example of the incompetence of the Iranian state.

The IMF recently wrapped up a visit to Iran and commended the government for early successes with the subsidy reform programme and the advances in the financial sector, which is boosted by a buoyant stock market.

The argument that Iran is economically isolated does not hold either. According to the most recent Unctad report, foreign direct investment to the country has increased exponentially from $1.6bn in 2008 to $3.6bn in 2010.

This does not mean that there are no serious economic problems in the country; there are many and they range from corruption to structural inefficiency. It means that there is another side to the Iran story that is subdued for ideological reasons. Ultimately, the US and to a lesser extent the European Union are disqualifying themselves from the Iranian market during a period of intense economic calamity. China and Russia say "thank you".

There are also several "soft" factors that feed into the relative stability of the Iranian economy. The country has secured a place among the technological innovators in the region, primarily due to systematic investments in a functioning research and development infrastructure. The number of scientific publications in Iran has increased from 736 in 1996 to 13,238 in 2008, the fastest such growth in the world.

As a part of the comprehensive plan for science, Iran plans to establish a nanotechnology centre and allocate 4% of GDP to research and development. As a consequence of these policies, Iran has become a force in stem-cell research and satellite technology. A few weeks ago, it successfully launched the Rassad satellite and sent its first bio-capsule of living creatures into space in February using the Kavoshgar-3 (Explorer-3) carrier. By 2019, Iran plans to send its first astronauts into space.

The second dominant narrative, closely interlinked with the previous one, prophesies the impending demise of the Islamic republic. This is comparable to similar predictions about the downfall of the Castros who have been in power in Cuba for almost six decades now. Yet the idea that the Iranian state is collapsing is ideologically opportunistic and remote from the political realities in the country.

To my mind, there are several interdependent reasons why the Iranian state remains relatively stable, at least in the short to middle term:

• There is no absolute absence of popular accountability

• There is a committed base supporting that state and there is no real penchant within the country for revolution, even by the repressed opposition.

More importantly, there is no over-dependency on the west that would yield a legitimacy crisis (as in Hosni Mubarak's Egypt and Zine al-Abidine Ben-Ali's Tunisia and under the shah) and there is no subservience to Israeli demands. The Iranian government's strident emphasis on "national independence" continues to garner support within Iranian society. Hence, the confrontation over the nuclear file is repeatedly stoked up in order to fan the flames of Iranian nationalism.

These are conclusions that are largely subdued in many analyses about Iran. Instead, there exists an entire literature of instant expertise that is tied to the politics of the moment. If the analysis of a country is wrong the policy prescriptions are bound to be wrong too. Afghanistan and Iraq are very good examples of that relationship between the absence of sound knowledge on a country and strategic failure.
Articles