Former South Yemen President To Continue to Call for Secession

Ali Salim al-Beidh, who was born in 1939, was the president of the People's Democratic Republic of Yemen (South Yemen) and the secretary general of the Yemeni Socialist Party that ruled from 1986 to 1990. It was Beidh who signed a unity agreement with the Yemen Arab Republic's (North Yemen) President Ali Abdullah Saleh, establishing the Republic of Yemen on May 22, 1990. On May 21, 1994, a war broke out between the two sides and ended on July 7 of the same year with the defeat of the south, as northern forces took control. On May 21, 2009, responding to calls from the Peaceful Southern Movement, Beidh announced his desire for a split between the People's Democratic Republic of Yemen, which he represented given that he was president when the unity agreement was signed, and the Yemen Arab Republic. Al-Monitor's correspondent met with Beidh in his office in Beirut, and asked him about his demands for secession, his position on the establishment of a federal region, the national dialogue and relations with the Houthis, Iran, Saudi Arabia, the United
.States and Russia. 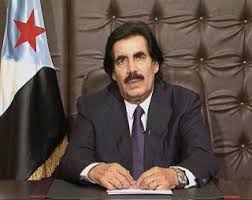