How sectarianism and regional powers foment terrorism in Iraq

Terrorism in Iraq today is a parasite that thrives on sectarianism, its host, which allows terrorists to recruit fighters and suicide bombers and provides them a religious motive to operate against their enemies, mainly from other sects and religions, and sometimes from the same sect but from a different religious or political orientation.
Obviously, Al Qaeda is responsible for the waves of terrorist blasts that targeted Iraqi cities this year, especially Shi’a towns and areas. But the timing of the rise of these attacks was related to the inflammation of the sectarian war in Syria and the involvement of many regional powers in this war. 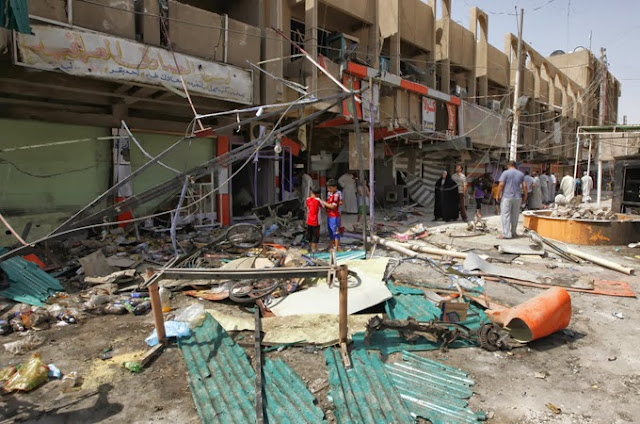 It is no longer a secret that Saudi Arabia, Qatar, Turkey and other Sunni Gulf and Arab states are supporting the Syrian armed opposition against the Syrian regime of President Bashar Al-Assad, due to his alliance with Iran and Hezbollah and his regime’s Alawite affiliation that belongs to the Shi’a sect of Islam. Iraqi Prime Minister Nouri Al-Maliki has called for a political solution of the Syrian crisis and refused the change of the Assad regime by force.
This position has been considered by Turkey, Qatar and Saudi Arabia as an attempt to assist the Syrian regime for sectarian reasons and to satisfy the Iranian Islamic republic. Turkish Prime Minister Rajab Tayeb Erdogan expressed this view early by accusing Al-Maliki of provoking sectarianism in Iraq. Al-Maliki has rejected Erdogan’s interference in Iraq’s affairs and described it as a sectarian Sunni instigation in Mesopotamia.
Thus, it was not surprising that terrorist blasts occurred daily in Iraq with such intensity and ferocity in 2012 and 2013. Turkey, Saudi Arabia, Qatar and other Arab states have not condemned these attacks, while they would hurry to condemn any terrorist blast in a Western country or any other Arab country among their allies.
Many Iraqi politicians and Shi’a clerics repeatedly accused Saudi Arabia, Qatar and Turkey of supporting terrorism in Iraq by funding terrorists and sending foreign “jihadi” fighters to Iraq and Syria, as well as by providing logistics, arms and safe passage from Turkey.
Al-Maliki said in an interview with Al-Monitor this week that the rise in terrorism in Iraq is rooted in the rise of regional sectarianism and is “directly related to the developments in the Syrian crisis and its repercussions on the Iraqi arena.” He added, “We are very worried about the Syrian arena transforming into a field that attracts extremists, terrorists and sectarians from various parts of the world, gathering them in our neighborhood.”
Al-Maliki explained Turkey’s role in his country. “Our relationship with Turkey was stronger than our relationship with Iran. (But) Turkey has been inclined to openly intervene in Iraq’s affairs. This caused sectarian provocation, when [Ankara] stood with the Sunnis against Shi’as.”
Speaking on Thursday, October 10 at an international conference addressing crimes of terrorism, Maliki said, “Iraq is a great laboratory to study the issue of terrorism.” He added that what is happening in Syria is a civil war planned to move into Iraq. He accused regional states of sponsoring terrorism, inciting sectarianism, interfering in the political process and impeding the reconstruction of Iraq, especially the western province of Anbar.
Al-Maliki has acknowledged and promised to fulfill social, economic and political demands of Sunni citizens and considers some of them logical rights. On the other hand he refused to respond to demands he views as sectarian and not legal, such as releasing the Sunni prisoners who were condemned by the tribunals for operating terrorist blasts and killing thousands of Iraqi citizens.
Al-Maliki said in a statement this month after meeting with the governor of Anbar that legitimate demands have been met and other demands will be met. He also expressed his willingness to meet all the needs and demands of the Sunni provinces that lead to security and stability and help launch the reconstruction plan of the country.
The Iraqi government is attempting to counter terrorism and sectarianism by containing the Sunni citizens of Anbar and other provinces, responding to their demands and preventing Al-Qaeda and regional states from recruiting them in terrorist groups under the umbrella of protecting the Sunnis against the Shi’a pro-Iran government.
A former Iraqi minister who spoke on the condition of anonymity with The Atlantic Post said, “There is a link between what is going on in Syria and the increased wave of terror against innocent Iraqi people, and regional countries are involved in supporting these radical groups.” He added, “The Syrian question is no longer just a Syrian internal matter. It is also a regional and international question par excellence for which innocent Syrians, Iraqis and Lebanese are paying a heavy price. One day, support of these extremists will backfire on those who are supporting them. It happened already.”
Regarding the Sunni protests, the former minister stated that he has “no documents or proof of foreign links or foreign states’ manipulation of demonstrations in Anbar. The government of Iraq itself has declared that the ongoing demonstrations of almost 10 months have legitimate claims and constitutional and non-constitutional demands.”
He added, “Some elements among the demonstrators were accused of having ties with Qatar and Saudi Arabia or Al Qaeda, while Al-Maliki’s government was accused by the demonstrators for being sectarian, tied to Iran and assisting Bashar Al Assad’s regime and slaughtering of its people and in particular Sunnis.”
Moreover, the so-called Islamic State of Iraq and the Levant (ISIS), Al Qaeda’s branch in Iraq, claimed responsibility for a terrorist attack on security headquarters in Erbil this month. ISIS declared that it was a response to Kurdish President Massoud Barzani’s statement of a possible intervention of Iraqi Kurds in support of Syrian Kurds who were massacred by “jihadi” and “Salafi” terrorists. Over 200,000 Syrian Kurdish refugees have fled to Iraqi Kurdistan after being attacked, and several of their areas have been encircled by these extremist and terrorist groups.
The same source explained that the violence in Iraq became “a domestic issue in a divided region in turmoil that interferes in local and regional agendas due to the power rivalry of two competing axes. Our region has become a fertile ground for diverse merchants of blood, religion and sect.” He concluded, “The war in Syria will continue for sometime until that there will be a national consensus in Syria along with a regional and international balance to achieve security.”
Haytham Mouzahem is The Atlantic Post’s Middle East Analyst, based in Beirut, Lebanon.
Articles