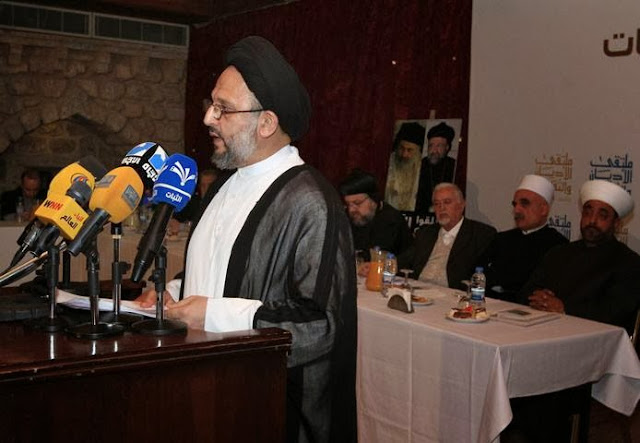 In 2001, the late Shi’a scholar Grand Ayatollah Sayyed Muhammad Hussein Fadlallah held a group interview with journalists. Fadlallah was a famous cleric in Lebanon and the Arab world and known in the West since October 23, 1983 when a suicide bomber killed 241 Americans at the U.S. Marine barracks in the Lebanese capital of Beirut.
Fadlallah, who died in July 2010, had been accused by the United States of blessing the attack due to his reputation as a “spiritual mentor” of Hezbollah. He vehemently denied both affiliations. He was also the target of an assassination attempt by a car bombing in Beirut in 1985, which according to American leaks was linked to the CIA with collaboration with Saudi intelligence and a Lebanese group. Later, the differences between Fadlallah and Hezbollah publicly revealed that the Islamic Marjaa’ was not at anytime a “spiritual leader” of the Shi’a Lebanese party.
Instead, Fadlallah left a legacy of interfaith dialogue and cooperation. Lebanon’s Sunni Prime Minister 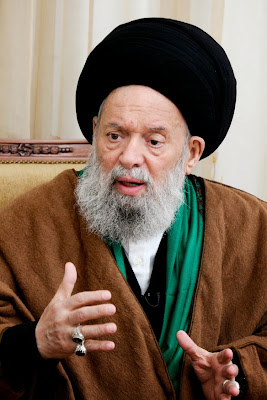 Saad Hariri called him “a voice of moderation and an advocate of unity.” Last month, Fadlallah’s son Sayyed Ali Fadlallah launched in his honor a Muslim-Christian dialogue and Muslim-Muslim dialogue initiative between the Islamic sects, especially between Sunnis and Shi’as.

The initiative, called the “forum of religions and cultures for development and dialogue,” included 50 Muslim and Christian clerics, intellectuals and politicians from Lebanon and the Arab and Islamic world. The dialogue initiative is founded in the ideals and work of the elder Fadlallah.
During the 2001 meeting, Fadlallah focused on his alleged role in the Marines blast and his relation with Hezbollah and Iran, as well as his vision of Islam, the Islamic state and cohabitation with Christians. Fadlallah told us that he always called for a Muslim-Christian dialogue and even a Muslim-Jewish dialogue as part of interfaith efforts to bridge the gap among the Abrahamic religions of Judaism, Christianity and Islam. He stressed that Islam recognizes Christianity and Judaism and rejected any offense against Jews or Christians in any Arab or Muslim country.
Rather than call for establishing an Islamic state in Lebanon, Fadlallah believed in the state of the “human being” in his country, in including all religions and sects and treating all citizens as equals, apart from their religious affiliations.
The Lebanese Ayatollah held thousands of dialogue sessions with Christians, Muslims, non-believers, Lebanese, Arabs, Western politicians, clerics and intellectuals.
Asked about the increasing talk about interfaith dialogue in the 1990s, Fadlallah said,  “Allah taught us that have dialogue with all people [with] no sanctity in the dialogue. Allah has even engaged in a dialogue with  the devil. Is there anyone from people like Satan?” He added,  “The Qu’ran is the book of dialogue…with the unbelievers on the presence of God and the prophecy of the Prophet…”
Fadlallah, the author of book “The Dialogue in the Qu’ran,” explained that the Qu’ran did not define the topics of dialogue or specify with whom we should have dialogue. He said, “There is no problem in dialogue with anyone whatsoever, because there is truth we need to collaborate to discover it, and the dialogue is a way of cooperation to discover the unknown, and not a method to count the negative points of the others” in terms of differences with them.
Sayed Ali Fadlallah, a cleric-scholar like his father and the director of Al-Mabarat charity association, told The Atlantic Post in an exclusive interview that the initiative seeks to create an atmosphere of cooperation between the religions and sects to issues of dialogue at the Arab, Islamic and international levels in terms to strengthen the relationship between members of different religions and reject all forms of sectarianism. He added that what distinguishes this dialogue is its inspiration from the approach and experience of his father, Ayatollah Fadlallah.
The younger cleric acknowledged that many efforts have preceded this initiative, which will be followed by other efforts. He said the Forum was not intended as a substitute for other dialogue bodies.
Fadlallah stressed that the problem of violence and extremism originates with a retreat of the values of humanity, stating an urgent need for dialogue on the national, regional and international levels that focuses on the “human being,” life and values ​​of right and duty. He explained that contemporary religious discourse needs to find a balance in moral and religious values ​​as well as those of human rights to confront the dangers of destruction and division in Arab countries.
Fadlallah highlighted the importance of scientific and educational programs to confront deviations at the intellectual and religious levels that cause escalating waves of sectarian violence in the Middle East. He added, “We will discuss the issues and the problems facing the Arab and Islamic world, especially the increasing extremism and sectarianism and the various conflicts to develop a strategy and an integrated vision to confront them at all levels.”
This initiative has been warmly welcomed and supported by Christian leaders in Lebanon, Syria, Iraq and Egypt, due to their deep concern for the future of Christians in the region.
Sources in the Forum founding committee told The Atlantic Post that Christian religious leaders support this initiative because it acknowledges their concerns and may help them in the front of fighting extremism and terrorism that has harmed Christians and Muslims and is pushing Christians to migrate from their countries to the West.
Sheikh Hussein Shehadeh, the head of the Preparatory Committee of the Forum, said at the conference that “the Forum strategies are based on building civil peace in Lebanon and the world, and will focus on improving dialogue rhetoric dealing with national issues, particularly cohabitation on the basis of citizenship, dignity, justice and equality, which should become the basis for resolving disagreements and avoiding hatred and violence.
The Forum has distributed an initial program of work that will be implemented by four committees.
Dr. Haytham Mouzahem is The Atlantic Post’s Middle East Analyst and is based in Beirut, Lebanon.
Posted on November 3, 2013
Articles