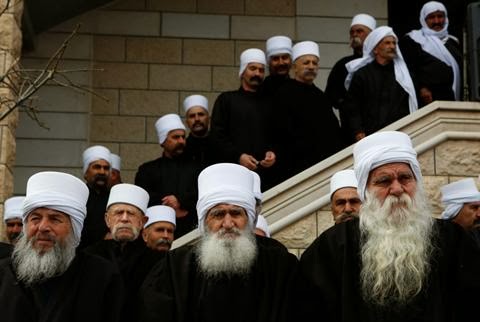 BEIRUT, Lebanon – Last week, a Syrian friend who lives in Damascus, told me, “The Islamic State of Iraq and Syria” (ISIS), Al Qaeda’s branch in Syria, has forced the Druze of Idlib in North Syria to announce their conversion to Islam.”
The Druze are a monotheistic community and call themselves Ahl al-Tawhid (“People of Monotheism”) or al-Muwaḥḥidūn (“the Unitarians”). The Druze sect is an offshoot of Ismailism, a branch of Shi’a Islam. The Druze are a small minority of about 1,500,000 found primarily in Syria, Lebanon, Palestine and Jordan.
The Druze say they are Muslims and believe in the monotheism of Allah, his Prophet Muhammad and his book, Al Qu’ran. But some researchers say Druze beliefs incorporate several elements from Abrahamic religions and from some philosophies, particularly Gnosticism, Neoplatonism, Pythagoreanism and others.
The Druze doctrine is indeed esoteric and the group’s book, Al-Hikmat, is not available to anyone in the public, even to Druze people, unless they become religious and practice the sect’s rituals. This ambiguity has allowed some other Muslim sects to speculate about the Druze doctrine and beliefs and accuse the Druze of abandoning Islam and innovating a new religion.
However, the Druze are officially acknowledged as Muslims in Syria, Lebanon, Egypt and some other Muslim countries.
My Syrian friend, who is Alawite and a ministry director, told me that he gathered some of his Druze employees to discuss the situation of their brothers and sisters in Idlib. That shows the fears of the religious minorities in Syria today: Allawites, Christians, Shi’a, Ismailis and Druze.
The extremists of ISIS, Al Nusra Front, another branch of Al-Qaeda and other Islamist groups have been responsible for many massacres against Alawites and Shi’a in Syria, especially in the Lattakia countryside and Homs province and recently in Adra village in the Damascus countryside. They have also attacked many Christian towns and villages and push inhabitants to flee their homes. They occupied the historical village of Maalula, the oldest and only Christian town where inhabitants continue to speak Aramaic, the language of Jesus Christ. Many nuns were captured and blackmailed with political and sectarian demands. 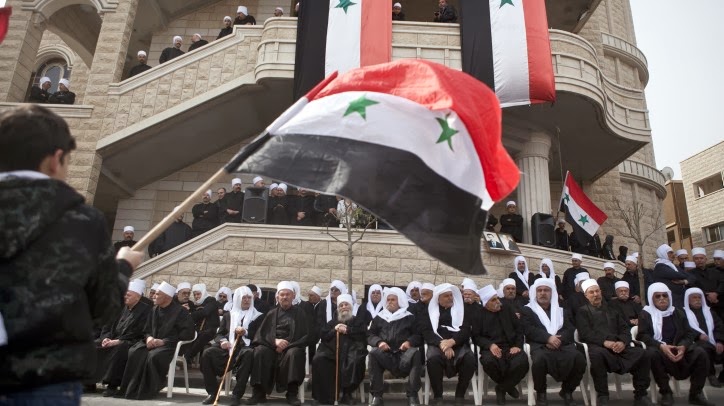 ISIS and Al Nusra have forced residents of the areas they control to follow their version of Islamic law, or Shari’ah, and have implemented a very extremist interpretation of Islamic rules, especially regarding punishment and execution of adversaries and other sects or people believed to have committed sins or acts considered unacceptable.
Al-Akhbar newspaper reported that about 30,000 Druze living in 18 poor villages have been compelled to announce their conversion to Islam in Idlib province, as some Saudi websites posted.
ISIS announced that residents of Druze villages will be executed and their homes destroyed if they do not publicly renounce their faith and embrace Sunni Islam. The Druze villagers were also required to convert their traditional prayer houses into mosques. The Druze representatives of these villages reluctantly agreed and announced that they were Muslim converts.
A Saudi preacher has posted on his Facebook and Twitter pages photos of himself leading the prayer with some Druze men at their khilwa, or Druze place of prayer. He proudly announced the conversion of these 18 villages and published a letter of Druze sheikhs proclaiming their beliefs in Allah, Islam, Mohammad, the Qu’ran, the other prophets, the Resurrection and the Last Day. In this alleged letter, the Druze denied their known doctrine of reincarnation that opposes the doctrine of Resurrection and the Last Day. They stated that this doctrine is a Hindu belief that does not belong to Islam. 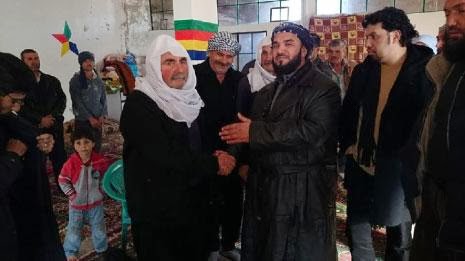 Photo caption: The Saudi preacher Al- Ghamedi with some Druze in Idlib province.
Lebanese Member of Parliament Talal Arslan was the only Druze leader who commented on the incident. He found it unusual, asserting, “Druze, like other Muslim sects, believe in the message of our Prophet Mohammad.”
Al-Akhbar quoted sources saying that the ISIS asked the Druze to add domes and minarets to theirkhalawats, or places of worship, transforming them into official mosques, and ordered residents to respect the Islamic dress code for both men and women. Men were required to trim their moustaches.
Dr Akil Mahfoud, a Syrian professor and scholar, told The Atlantic Post that the Druze of Syria had not been able to announce their position towards the crisis in Syria since the first protests of Dar’aa began in a neighboring Druze stronghold called “Mountain of the Druze” or Jabal Al-Arab (Mountain of the Arabs).
Mahfoud added that the opposition movement demonstrated early its sectarian trends and religious agenda regarding the future of the state and society of Syria. Early YouTube clips of clerics in Dar’aa said that the historical Druze leader and hero, the late Sultan Al-Atrash, was not a revolutionary Syrian leader against French colonialism and that the Druze are not Muslims.
Mahfoud said the Druze did not initially support the regime of President Bashar Al Assad and objected to the regime’s policies. But the Druze position has evolved regarding the regime as a way to cope with their fears about Syrian society possibly being governed by the opposition, which is based on theTakfiri element of Islamism. The majority of Druzes now openly support the regime due to their fears of Islamist pressure. The Druze also shifted their support in response to calls from some Druze leaders in Lebanon who urged them to participate in the anti- regime movement. 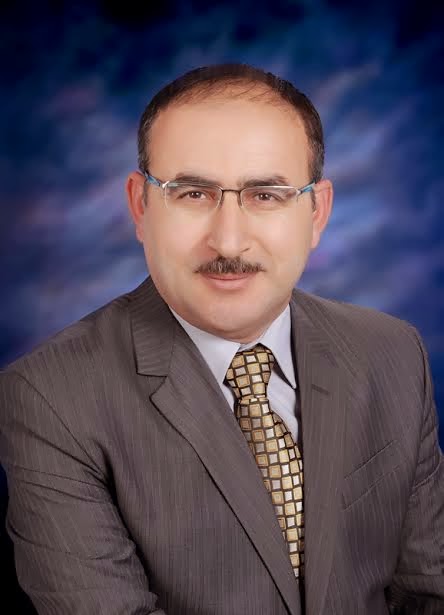 Mahfoud explained that many Syrians are unaware that Druze inhabit Idlib province, where their situation was previously in a positive and neutral state. Druze welcomed the displaced from neighboring areas, most of them from Syrian opposition and families of Free Syrian Army fighters. Mahfound said Islamist behavior has raised the concerns of religious and ethnic minorities regarding their future in Syria.
Mahfoud warned of the growing indicators of sectarian persecution and cleansing in light of the opposition silence at home and abroad. He spoke of a collusion between factions of the political opposition and the Jihadi Takfiri groups. Ironically, the extremist and Takfiri groups who claim to be implementing the rules of Islam are contradicting text in the Qu’ran:
“There shall be no compulsion in [acceptance of] the religion. The right course has become clear from the wrong. So whoever disbelieves in Tyranny and believes in Allah has grasped the most trustworthy handhold with no break in it. And Allah is Hearing and Knowing.” (Surat Al-Baqarah (The Cow), 256).
The Prophet Mohammad called people of Arabia to confess that there is no God but Allah and that he is the prophet of Allah. He accepted the verbal attestation from his followers of belief in Islam and did not ask to test their internal beliefs.
From this viewpoint, all Muslims remain Muslims as long as they claim to be so and do not announce their apostasy, and so are the Druze, the Shi’a and the Alawites.
Dr. Haytham Mouzahem is The Atlantic Post’s Middle East Analyst, based in Beirut, Lebanon.
Articles