November 01, 2013
By Haytham Mouzahem
Many elements have threatened the United Nations “Geneva 2″ conference that the United States and Russia have agreed to convene in November to end the Syrian war that has killed over than 100,000 people and forced millions to leave their homes.
Syrian President Bashar al-Assad declared on October 21 that “factors are not yet in place” for the scheduled peace talks in Geneva, Switzerland.
He said in an interview with Al-Mayadeen television in Beirut, “No time has been set, and the factors are not yet in place if we want Geneva 2 to succeed.”
“Which forces are taking part? What relation do these forces have with the Syrian people? Do these forces represent the Syrian people, or do they represent the states that invented them? There are many questions about the conference…What is the framework of the conference?” Assad asked.
Assad has not ruled out running for re-election in 2014. He responded to the question of Al-Mayadeen’s Chairman of the Board, Ghassan Ben Jeddo: “My answer depends on two factors. The first is the personal desire, and the second is the will of the people. Regarding the first point, I don’t see any reason why I shouldn’t run in the next election.” 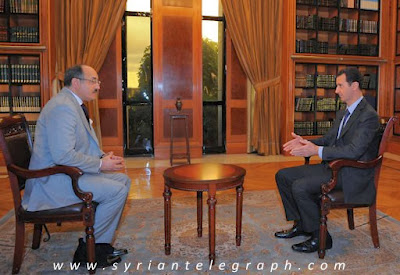 This declaration was enough to provoke the opposition that set Assad’s removal from power as its principal condition to participate in the conference.
Ahmad Jarba, president of the Syrian National Coalition opposition group said on Tuesday that the coalition will not participate in the peace talks unless the goal is to remove President Assad from power.
“The Sultan must leave,” Jarba said in reference to Assad. “Geneva cannot succeed and we cannot take part if it allows Assad to gain more time to spill the blood of our people while the world looks on..The people will not believe us and will regard us as traitors to the revolution and to the blood of the rebels,” Jarba added.
U.S. Secretary of State John Kerry stated on Monday that any attempt by Assad to be re-elected would extend the country’s civil war. “If he thinks he’s going to solve problems by running for re-election, I can say to him, I think that certainly this war will not end as long as that’s the case that he’s there,” Kerry said.
Kerry said the regime and the opposition must negotiate to find an alternative to Assad and reach an agreement on a transitional government . He added that Assad has lost his legitimacy to rule, and hence there is no room for him within the transitional government that should come as a  consensus between the parties of the regime and the opposition.
Speaking after the “Syria Friends” meeting of 11 nations in London,  Jarba has set conditions to participate in Geneva 2, including the exclusion of Assad from any transitional government would be reached at the peace conference, open humanitarian corridors for more than a million civilians trapped in the East Ghouta area in the Damascus countryside, and others in the old Homs city, as well as the release of women and children detained in the prisons of the Syrian regime.
Jarba stated that the coalition leadership will meet within the next 10 days and will announce its decision on participating in the conference. He rejected Iran’s potential participation in Geneva Conference, accusing it of participating in the killing of Syrians. Jarba called for a timetable for negotiations and also called for the implementation of any potential agreement under Chapter VII of the Charter of the United Nations.
Kerry and British Foreign Secretary William Hague attempted at the London 11 meeting on Tuesday to convince the opposition coalition to participate in Geneva 2.
“They have to make up their mind…And none of us are going to prejudge what they will do in that process,” Kerry said at a news conference. He added that Jarba and other opposition leaders will assemble next week and discuss whether to participate.
The communiqué issued by the London 11 reiterated that a transitional government should be established as part of a political settlement, indicating that Assad and his close associates “with blood on their hands will have no role in Syria.”
This element could pose an enormous obstacle to the Geneva 2 conference. The communiqué also called for stepping up support to the political and military wings of the “moderate” Syrian opposition.
From his side, Assad has refused to recognize as legitimate the National Coalition opposition. He said in the interview, “How can these forces represent the Syrian people if they live abroad? They don’t dare to come to Syria…but claim to control 70 percent of Syrian territory.”
The Syrian president accused the opposition coalition of working under the orders of regional and Western backers. “The solution [to Syria's war] must be a Syrian solution, regardless of whether foreign powers recognize it…What matters is that the Syrian people recognize it,” Assad said.
He ruled out any negotiation with the Muslim Brotherhood or the armed rebels, calling them “terrorists” and indicating that he prefers to negotiate with the United States rather than “its secretaries,” in reference to Saudi Arabia, Turkey and Qatar. Assad accused these three states of supporting the armed groups and being involved in supporting terrorism in his country.
Since both the regime and opposition have established their own particular conditions to attend Geneva 2 and refuse to recognize each other, it seems that the peace conference will not take place next month unless the United States and Russia pressure them and their allies to facilitate the talks.
It was remarkable that U.N. special envoy to Syria Akhdal Ibrahimi urged Iraqi Prime Minister Nouri Al-Maliki during his visit to Baghdad on Monday to convince President Assad to make concessions, without revealing what kind of concessions.
Ibrahimi will meet with American and Russian officials on November 5 in Geneva, in preparation for the peace conference.
Meanwhile, the Syrian people have to wait and keep paying the heavy price of war until international and regional players decide to help end this bloody conflict.
Haytham Mouzahem is The Atlantic Post’s Middle East Analyst, based in Beirut, Lebanon.