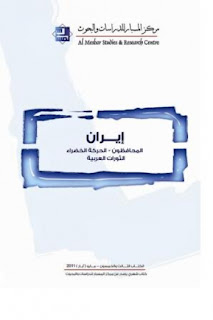 Our fifty second book covered the historical aspects and main ideological principles of contemporary Iranian political currents before and after the Islamic revolution in 1979.
On the other hand, this publication includes the movements existing in the Iranian political scene within the intellectual, political and social levels. Also, it offers reflections of the scene in three decades in which Islamization processes and clerical rule took place.
Recently the Iranian stance, represented by its different sects and trends, toward protests and revolutions in Iran or the Arab world received a big magnitude of focus from media.
The first study was by the Lebanese researcher, Haitham Muzahim, dealt with the doctrinal and intellectual diligence in Twelver Shī‘ism doctrine, following the adoption of the Islamic Republic of Iran’s system and Constitution.
Muzahim presented a summary of the theory and its history as well as the number of scientists and references who have tried to invent similar theories or develop the theory. These theories differ in their restrictions on President’s rights and powers of Constitution and powers of jurist as a thinker and republican’s strategy officer.
The professor of religious studies at the University of Virginia, Abdulaziz Sachedina, dealt with the legal and constitutional implications of the governance of justice during the last two decades. He tackled the fear and apprehensions which have put the theory into the trap of national Islamic security with respect to the nationality of the Islamic reference.
He addressed that the Sunni thought separates between the religious rule and the secular rule as it chooses a successor through a secular way. On the other hand, he stated that the Shiite ideology linked the secular option with a religious obligation of divine.
The study addressed Khomeini's attempt to combine between the " marja` al-taqlid " ("supreme legal authority accepted for emulation") and “al-wali al-faqih”, and the fate of the theory after the death of Ayatollah Khomeini and the problems it faces today; determining the “Wali al-Faqih” , " marja` al-taqlid " and the one who is combining them.
Aida Mazih dealt with, (Hezbollah’s supporters ... Conservatives’ arm strikers), which is the party that provides support to the Iranian President Mahmoud Ahmadi Nejad and one of the prominent powers in the Iranian revolution and the Islamic Republic of Iran.
Mazih explains how the party views and considers that the “Wali al-Faqih” is not elected by experts, but he is appointed by God and experts do nothing but discovering him through their knowledge and experience.
The expert and former adviser to the Foreign Affairs of Iran, Nabil Atoum, tackled reformists and conservatives in Iran, showed the emergence of conflict and disagreement between them and kept track of a reformist trend’s formation stages.
He confirms that the main current dispute at the intellectual level is about the province of jurist and his powers which restrict the President of the Republic.
Nabil Atoum attributed the failure of Khatimi in implementing the reforms he wanted in his term to the restrictions imposed by the supreme leader and that justifies the continues desire led by the reformation movement to diminish the powers of the supreme leader, especially after that experience. On the other hand, conservatives try to protect the powers of the supreme leader to keep the revolution’s status quo.
The Green Movement was the subject of Ali Hussein bakeer’s study as he addressed its direction and fate. Bakeer divided the Iranian opposition into as armed opposition, political opposition and religious opposition.
Bakeer tackled the symbols of each segment as well as the reformation movement and its influence. Also, he identified the birth of the green movement by its opposition to the fraud of the Iranian presidential elections in 2009 and the implications that led to demonstrations which made the movement active.
Finally, he addressed movement’s components in the social, political and religious aspects as well as its objectives and predicted its future in the light of the challenges it faces due to the repression, dispersal of its supporters and the multiplicity of its leaders.
Omar Al-Bashir Al-Turabi tried to link Arab revolutions and demonstrations with the Green Movement in Iran. He compared the nature of security in both cases and the psychology that unifies the two parts, starting from the story of Iran's Islamic Revolution in 1979 and its similarity with the green movement in terms of slogans and objectives.
The expression of disappointment in the Islamic Revolution (1979) was reflected by the green movement demonstrations in 2009. Al-Turabi explained the similarities of this disappointment in the Arab republics that have already been through revolutions in the fifties and sixties. He considered the two models; the Arab and Iranian models did not fulfill the requirements for success, and that there wasn’t an honest dealing with theories either the Islamic or Republican ones.
Finally, the study dealt with Iran’s reformists and conservatives view on Arab protests.
Al-Mesbar chose Dr.Farida Farhi’s interview, a lecturer at the postgraduate studies college at the University of Hawaii in Manoa. This interview dealt with the repercussions of Arab demonstrations and their impact on Iran as well as the prevention imposed by Iranian authorities on demonstrations.
Also, many other issues were addressed in the interview such as, the dismissal of Hashemi Rafsanjani, the upcoming elections in 2013 and Dr.Farida Farhi‘s predictions on the Iranian government concerns.

The picture from the Iranian scene will not be complete without tackling Iran relationship with the West in general and USA in particular. Therefore, the editorial board provided a brief chronology on the history of Iranian-American relations after World War II in 1941 until 2010.
Farhang Rajaee’s book entitled, (Islamism and modernism. The changing discourse in Iran), which was translated by The Emirates Center for Strategic Studies and Research, is the book chosen for this publication.
This book addressed the interaction of the Islamic Movement of Iran; which was divided into four generations, with modernism by dividing them into four generations. Also, the author analyzed the important stages of the Islamic movement in Iran, its discourse and the developments it experienced by the comparing between two parts: Islam (Qum) and the Islam of the University of Tehran.
The study of the book was about (Islamists in Tunisia and Egypt after the revolution: Dimensions, consequences and the beginning of a new Middle East) for the Tunisian researcher Aliya Alani.
Alani’s study dealt with the Islamists after the revolution of January 14, 2011 in Tunis and its strategic option between the coalition or containment or integration. On the other hand, in Egypt the study tackled the question of whether the revolution surprised the Islamists in Egypt.
Finally, the researcher addressed that the course of the events predicts the beginning of a new Middle East as he reviewed some major future challenges.
The issue of the publication was a summary of testimonies provided to the American Congress (House permanent select committee on Intelligence subcommittee on terrorism, HUMINT, analysis, and counterintelligence) by a group of experts in mid-March.
The testimonies were about the role of the Muslim Brotherhood in Arab region’s revolutions, the extent of their influence or the revolutions’ impacts on them, and the future prospects after they became one of the policy-makers in Egypt after the toppling the regime of President Mubarak.
We chose to place the fifth testimony of the researcher at Rand Corporation, Lorenzo Vedeno, in the upcoming publication due to its length compared to other testimonies.
By this book, Al-Mesbar Studies and Research Centre have published three books on the Iranian situation, the political currents, and Sunnis in Iran which was published in October 2010.

We hope that we have provided great information and topics to researchers and people interested in the Arab world as we are attempting to fill the shortage in the Arab libraries by updating it with important information about this region which is a venue that is rich in terms of experiences and intellectual transformations.
Book Reviews