Turkey and Arab strategic options: a book review of The Arab-Turkish Dialogue between Past and Present 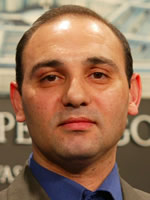 In November 2010, the Center for Arab Unity Studies published the book Arab-Turkish Dialogue between Past and Present, a collection of papers delivered and discussions held at a symposium organized by the center in collaboration with the Arab Institute for Democracy and the Global Political Trends Center in Istanbul.

In introducing "Turkey and the Arab Strategic Options: a reading in The Arab-Turkish Dialogue Between Past and Present," Mohammad Abd al-Safee Issa says that many changes have taken place since the November 1993 symposium "Arab-Turkish Relations: a Futuristic Dialogue," which was organized by the Center for Arab Unity Studies in collaboration with the Turkey-based Middle East and Balkan Studies Institute.

In the sixteen years separating the two symposia, radical shifts took place, notably the change in the structure of the international system following the collapse of the Soviet Union, which used to counter-balance the United States; this collapse took place in a relatively gradual manner, stretching from 1985 until 1990, and ended with the official declaration of the death of the USSR.

On the Turkish side, the fall of the Soviet Union ended - to an extent - the obligations of the old Turkish alliance with the Western coalition led by the United States, especially in its NATO component. Wider horizons were opened for Turkish aspirations in all directions, east and west, north and south. Turkey sought to rebuild its zone of influence in Central Asia, specifically in Turkic-speaking countries. It also tried to improve its relations with Iran, India, China, and the Arab world. To the north and west, Turkey maintained its march towards joining the European Union.

One of the most important political junctures for Arab-Turkish relations came with the rise to power of the Islamist-leaning Justice and Development Party in Turkey in 2002. The ensuing radical change in Turkish foreign policy had deep imprints, especially on relations between Turkey and the Arab world, with foreign trade between the two sides increasing from $4.7 billion in 1992 to $22.5 billion in 2007. On both the official and the popular levels, Arab-Turkish relations have improved markedly in recent years, reaching their apex on important aspects of the Palestinian cause, especially with Turkish Prime Minister Recep Tayyip Erdogan's positions regarding the Israeli attack on Gaza in late 2008 and early 2009, and following the deadly assault against the Freedom Flotilla, which sought to break the siege of Gaza in June 2010.

In his preface, Mohammad Shafi Issa opines that these notable developments are part of a new strategic approach aimed at opening up to Turkey's surroundings in all directions, and, thereby, exploiting the geopolitical advantages of Turkey's location and the legacy of its history. In the Arab and Middle Eastern contexts, recent Turkish policy has been based on reassessing the limits of this regional space, a process in which the most important effects have included warmer relations with Iran and cooler ones with Israel.

The symposium, which was the basis for the book, was clearly shaped by this new environment, and included twelve papers, six by Arab scholars and six by Turkish ones, in addition to broad discussions among the participants in the symposium, who numbered more than 40 and included figures of considerable intellectual weight.

In the opening address, the secretary general of the Arab Institute for Democracy, Muhsin Marzuq, stressed the need for the Arabs to learn from the experience of modern Turkey with regard to democratic transition.

In his opening remarks, Dr. Khaireddine Haseeb, general director of the Center for Arab Unity Studies (CAUS), declared that the symposium was an opportunity for dialogue between Arab and Turkish intellectual and political elites. He said the event had the potential to raise these elites' interest in Arab-Turkish relations and increase their efforts to strengthen these ties. Haseeb also expressed hope that this interest would spread throughout the popular level through the various media.

Haseeb also pointed to the significant progress in Arab-Turkish cooperation in recent years, with Turkey re-engaging with the Islamic world and developing positive relationships with Arab countries. He noted the importance of Turkey's being aware of the vital interests of Syria and Iraq in shared water resources, and the need to reach solutions that address mutual interests and conform to international treaties. He added that many Arabs are looking forward to a new Turkey that opens up to the Arabs, and not to the emergence of modern-day "Ottoman Turkey".

Turkey's deputy minister of foreign affairs, Ambassador Angin Soysal, spoke of the interest of Turkish Foreign Minister Ahmet Davutoglu in Arab-Turkish dialogue throughout the Middle East. He recounted that the ministry had sponsored his attendance of a training program at the European School during the 1980s in the context of Turkey's grooming of young technocrats in preparation for joining the European Union. Soysal's presentation focused on the European dimension in Turkey's foreign policy and the possible ways of achieving integration with the European Union. He also reiterated Minister Oglu's words to the effect that Turkey wishes to reduce its disputes with its neighbors to zero, in keeping with the late Mustafa Kemal Ataturk's adage: "peace in the homeland and peace in the world."

Soysal said that Turkey uses four major principles as a roadmap towards dispute resolution: security for everyone, dialogue with everyone, the creation of mutual economic dependencies, and mutual respect. Together, these are aimed at the establishment of a regional cooperation dynamic, one seen as a responsibility stemming from history and geography, as well as one that transmits positive energy. As examples, he mentioned several bilateral and multilateral processes, including economic cooperation in the Black Sea region, the Organization of Economic Cooperation, Turkey's position in the Organization of the Islamic Conference, giving a new push to the Bosnia-Herzegovina Group, and trilateral cooperation among Turkey, Afghanistan, and Pakistan.

Soysal also emphasized that the Foreign Ministry is the only Turkish ministry that makes foreign policy, and that Turkey has assumed this change of direction with a self-confidence deriving from its position as increasingly influential state, being a member of the G-20, having entered into the negotiations stage with the European Union, and being a participant in most regional initiatives.

Ambassador Soysal said that following the end of the Cold War and since the September 11 attacks, the problems of the Middle East have become more closely interconnected, which also applies to the area where Asia intersects geographically with the Middle East, a prime example being Pakistan. Turkey played a leading role in the Friends of a Democratic Pakistan Group, seeing it as a worthy effort aimed at shoring up the country's stability.

Soysal added that Turkey's geographical advantages, and its sharing of long borders with Syria and Iraq, should not be ignored. Turkey's vision, he said, is not based on security, but on history, with an eye to improving various bilateral relationships in order to make these ties less dependent on current conditions by basing them on a conceptual framework that carries this permanent vision of the region. Turkey has found this to be an effective diplomatic concept, one that helped the leadership shoulder its responsibilities when it came to ending conflicts with Syria and Iraq.

Such actions can only have meaning, he argued, if they are linked to a sense of responsibility emanating from notions of "regional ownership," mutual solidarity, and comprehensive dialogue. As a result, these elements have come to the fore of Turkey's foreign policy agenda as it relates to the Middle East. The difference between Syrian-Turkish relations in 1988 and Syrian-Turkish relations today, for example, is extremely dazzling. In Intab (Aleppo), Turkish and Syrian delegations included 10 ministers from each side, and no fewer than 48 protocols were signed. Relations with Iraq have witnessed a similar rate of improvement.

On Turkey's ambition to join the European Union, Ambassador Soysal predicted eventual success. He argued that Turkey should look at the post-EU phase with self-confidence, noting that his country already plays a role in defining the European Question. Therefore, he argued, Europe needs Turkey. In this context, he said:

"If we believe in the main dynamics of the European project, we should view these dynamics in the philosophical sense as representing a better, more prosperous future, and further economic and cultural rapprochement between people. When we examine the phase of European integration, we notice the absence of the concepts of the nation-state and national identity in the beginnings. But as you look at the current basic and foundational treaties, you will find that each accord includes the theme of respect for national identity. When the process of integration in the 1980s was designed in a manner that bothered European nationalisms, the concept of national identity began appearing in the treaties, becoming more prominent in Maastricht 1992, and then Amsterdam ... but when we observe the main mechanism set up by the Lisbon Treaty in 2009, we find a phase of integration that is protected by the nation-state, with the nations and their parliaments forming part of the European Union dynamic, even if this phase had a supra-national content."
Book Reviews