Iran and the Strait of Hormuz, Part 1: A Strategy of Deterrence 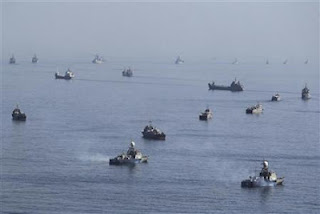 Part 1: A Strategy of Deterrence

Part 3: The Psychology of Naval Mines

Editor's Note: Though this article was originally published in October 2009, the ongoing debate over Iran's capabilities and intentions gives lasting relevance to the analysis within. Media reports continue to focus on efforts to disrupt Tehran's efforts to construct nuclear weapons, but the international community has a much greater strategic interest in ensuring the flow of oil through the Iranian-controlled Strait of Hormuz.

It has often been said that Iran’s “real nuclear option” is its ability to close — or at least try to close — the Strait of Hormuz, which facilitates the movement of 90 percent of the Persian Gulf’s oil exports (40 percent of the global seaborne oil trade) as well as all of the gulf’s liquefied natural gas exports. At a time when the world is crawling back from the worst economic crisis since the Great Depression, this is a serious threat and warrants close examination.

Iran actually has a broad range of military options for lashing out at energy exports in the strait, and this is not a new development. Almost since the founding days of the Islamic republic, Iran has been exercising military force in the Persian Gulf, starting with attacks against Iraqi tankers (and Kuwaiti tankers carrying Iraqi oil) during the Iran-Iraq War in the 1980s. But in all this time, Iran has never exercised the full measure of its capability to close the Strait of Hormuz to maritime commerce — if indeed it has that capability. Although Iran has an array of options for limited strikes, our interests here are the dynamics of an all-out effort.

Deterrence and the Potential for Conflict

Tehran has long been aware of the geostrategic significance of its proximity to the Strait of Hormuz. The threat of mining the strait or targeting tankers with anti-ship missiles is a central component of Iran’s defensive strategy. By holding the strait at risk, Tehran expands the consequences of any military action against it to include playing havoc with global oil prices. Insofar as Iran has avoided military action to date, this strategy of deterrence to this point can be deemed a success.

Yet the strategy has several weaknesses. For one, it can only discourage an attack, not directly prevent one. By the time an attack against Iran begins, Tehran’s military strategy has failed. Trying to close the strait after military strikes have begun cannot stop those strikes — it can only serve as a punitive measure. At best, an Iranian concession to stop its actions in the strait could serve as a card on the table in negotiating a cease-fire. But creating trouble in the strait is a hard sell internationally as a “defensive” measure. With the world just starting to recover from the global economic crisis, a move by Iran to close the strait could unite the world against Iran — perhaps more strongly than was the case against Iraq following Desert Storm in 1991.

Another weakness has to do with one of the classic problems of nuclear deterrence — the military incentive to strike first. In this case, the United States would very much want to leverage the element of surprise, catching and hitting as many targets as possible — not just the nuclear program but also Iran’s offensive and defensive military capabilities — where it expects those targets to be. The flip side, of course, is that Iran also needs the element of surprise. Because high-priority targets in any U.S. airstrike would include Iran’s capabilities to retaliate directly — its anti-ship missile sites, its mine warfare facilities, its ballistic missile arsenal — any retaliation by Iran after an American strike begins would be degraded, perhaps considerably, depending on the effectiveness of U.S. intelligence (Iran presents considerable intelligence problems for the United States).

As a result, while Iran’s deterrence strategy has thus far delayed conflict, a line can be crossed that puts everything on its head. Instead of delaying matters further, each side will have more incentive to act aggressively in order to pre-empt the other. And the problem is not simply that this line exists. The line is defined for each side by its subjective, fallible perceptions of the other’s intentions, leaving considerable room for miscalculation.

So, despite the considerable disincentives for Iran to try and close the strait, it can hardly be ruled out. Indeed, at the moment, with so much in motion politically, not just between Washington and Tehran but also between Washington and Moscow — and factoring in the Israeli wild card — the risks of miscalculation on all sides are very high.

The Strait of Hormuz

Connecting the Persian Gulf to the Gulf of Oman, the Arabian Sea and the world’s oceans, the navigable waters of the Strait of Hormuz are roughly 20 miles wide at their narrowest point. Commercial and naval maritime traffic, which includes 16 or 17 million barrels of crude oil aboard some 15 tankers per day, transits two designated shipping lanes inside Omani waters. Each lane (one into the Gulf, one out) is two miles wide and is separated by a two mile-wide buffer. (Almost the entire strait south of Qeshm and Larak islands is deep enough to support tanker traffic, so there is certainly room to shift the traffic further from the Iranian coast.) The importance of this waterway to both American military and economic interests is difficult to overstate. Considering Washington’s more general — and fundamental — interest in securing freedom of the seas, the U.S. Navy would almost be forced to respond aggressively to any attempt to close the Strait of Hormuz.

Tehran appreciates not only its strategic proximity to the strait but also the asymmetric military options related to it. A conventional interdiction in the strait by Iranian surface warships and submarines is perhaps the least likely scenario. Larger corvettes and frigates are few in number and would be easily targeted by U.S. naval and air power that is constantly within striking distance of the strait. While up to two of Iran’s three Russian-built Kilo-class submarines could probably be sortied on short notice, the cramped and shallow waters of the strait make submarine operations there particularly challenging.

The challenges mean that the proficiency of Iranian submarine crews (questionable at best) would likely be severely tested in a genuine operational scenario. The United States also recognizes Iran’s Kilos as an important Iranian asset and would make every effort to quickly neutralize them (whether at sea or in port) in any attack scenario. In any event, the Iranian navy does not have enough Kilos to have any confidence in its ability to sustain submarine operations for any meaningful period after hostilities began.

Well aware of its qualitative weaknesses vis-a-vis the U.S. Navy, Iran has a number of more asymmetric options. The most “conventional” of these are its fast attack missile boats, particularly 10 French-built Kaman guided missile patrol craft (Iran has begun to build copies domestically, though the first three appear to have been built in the Caspian). Smaller than a corvette, each of these boats has a medium-caliber naval gun and two to four anti-ship missiles. These very vessels comprised some of the most active Iranian naval units in the Iran-Iraq War. Although the U.S.-built Harpoon anti-ship missiles with which they were originally equipped appear to have all been expended during that conflict, the missile boats have reportedly been equipped with Chinese-built C-802 anti-ship missiles, which are based on the U.S. Harpoon and French Exocet designs. Employed in a surprise strike, these missile boats could score some early hits on traffic in the strait.

Even with the fast missile boats, however, there is still the issue of port dependence and vulnerability. Iran’s conventional navy, of which the fast attack missile boats are a part, would have to leave port immediately to avoid destruction alongside the pier — particularly challenging if the U.S. struck first. Of course, due to superior American naval and air power, Iran’s ships and subs — including the fast missile boats — wouldn’t be much safer at sea. Even if the missile boats succeeded in surviving long enough to expend their ordnance, they wouldn’t have a port to return to capable of rearming them.

Iran, however, has other asymmetrical tricks up its sleeve.
Articles