Syria withdraws intel from Lebanon and Bush warns it of new sanctions by: Haytham Mouzahem 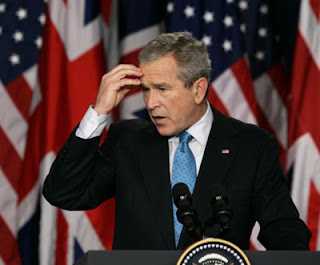 
Syrian forces have vacated three security and intelligence centers in Beirut and north Lebanon and left for Syria on late Saurday, under intense U.N. pressure to quit Lebanon, while U.S. President George W. Bush threatened on Monday to use new economic and diplomatic measures to pressure Syria over its suspected interference in Iraq before January elections The Lebanese army said in a statement on Saturday "Syrian troops pulled back to Syria today after vacating three security intelligence centers at Beirut airport, in the southern suburbs and the Batroun region".

A Lebanese army official, who spoke on condition of anonimity to the Associated Press, expected more Syrian troops in Lebanon to redeploy in the next few weeks to eastern Bekaa region near the Syrian border according to the 1989 Ta'ef agreement that ended the civil war.

The Lebanese official did not give the number of withdrawing soldiers, nor say how many security and intelligence posts would be left in Beirut and other areas. But experts estimated the Syrian troops and intelligence remained in Lebanon nearly 30,000 soldiers. A member of the Lebanese Cabinet, Wiam Wahhab, confirmed the Syrian partial withdrawal in a statement carried by the official National News Agency, saying that when "there is no need for the presence (of Syrian forces) in a specific area, a withdrawal takes places in a normal way."

A security source told Reuters that meetings between Syrian and Lebanese officials were still under way and other redeployments could be expected soon. Saturday's redeployment was the first of late to include a sensitive area such as Beirut Airport.

Syria has come under immense pressure recently to withdraw its troops in Lebanon and stop interfering in its political affairs. The partial Syrian pullout, the sixth since 2001, could be aimed to comply with the U.N. Security Council resolution 1559 demanding that Syria withdraw its forces from Lebanon.The move came only few days after U.N. Secretary-General Kofi Annan appointed Terje Roed-Larsen to follow up the implementation of the resolution and three months before a UNSC review of Syria's compliance with the 1559 due in March 2005.

A US State Department official said to the Lebanese Almustaqbal newspaper, commenting on the Syrian pullout, "We've seen these reports and are looking into them with Syrian and Lebanese officials. If true, this would be a positive step". "However, U.N.

Security Council Resolution 1559 is unequivocal in its call for Syria to immediately withdraw ALL of its forces from Lebanon, and allow the Lebanese Armed Forces and government to establish their authority throughout Lebanon. This has not yet happened, despite repeated calls from the international community, and we continue to call upon Syria to implement this critical international obligation", he added.

The United States said Syria doesn't comply at all with the resolution 1559, warning of taking new measures and possibly new sanctions on Syria. In an exclusive interview with ISN Security Watch, a senior US official, who spoke on condition of anonymity, said "Syria s record on 1559 is not very good. Syria says that it has withdrawn some troops from Lebanon, but we, along with the international society, want all troops to withdraw". He added "

The American official said that Washington will probably take new measures and possibly new sanctions on Syria, as downgrading the diplomatic relations with Damascus and imposing financial sanctions on Syrian banks and entities, if Syria didn't comply with the U.N. requests.

"We have sent messages to the Syrians in the past and we will continue to do so. We have tools at our disposal -- a variety of tools, ranging from diplomatic tools to economic pressure. Nothing's taken off the table," Bush told a news conference.

Bush is reviewing a wide range of options, including freezing the assets of high-ranking Syrian government officials, administration and congressional officials said. Administration officials said military options have not been ruled out. "All options are obviously on the table. We don't want to make it a military problem,"

Bush's threat comes less than a week after he demanded that Syria and Iran stop insurgents and money from entering Iraq ahead of next month's elections. "When I said the other day that I expect these countries to honor the political process in Iraq without meddling, I meant it. And hopefully those governments heard what I said," Bush said.

Bush said he has discussed with American generals "whether or not there are former Saddam loyalists in Syria ... funneling money to the insurgents." "We ought to be working with the Syrian government to prevent them from either sending money and/or support of any kind," Bush added.

Washington accused Syria of sending military equipment to Iraq during the U.S.-led war that toppled Saddam Hussein. Since then it has claimed that Damascus lets insurgents cross its border into Iraq and harbors former officials directing insurgents. Damascus denies those charges, and says it is doing its best to tighten control of the hundreds of miles of mostly desert terrain that define its border with Iraq.

Administration officials said in October that they were considering tightening U.S. economic sanctions on Syria to put pressure on Damascus to pull its troops out of Lebanon and crack down on terrorism. In May, Bush imposed a series of sanctions on Syria, including a ban on U.S. exports other than food and medicine.

The US Congress has overwhelmingly approved new sanctions on Syria in November for its alleged ties to militant extremists and purported efforts to obtain nuclear, biological and chemical weapons. The measure received final approval from the Senate in a vote of 89 to 4. The House approved the measure last month by a vote of 398 to four. "This bill ... adds to the tools available to the president to move Syria toward a more responsible course," said Senator Richard Lugar, chairman of the Foreign Relations Committee.

West Virginia's Robert Byrd, who along with three others senators voted against the measure, said that while he is critical of Damascus, he feared the vote "could later be used to build a case for a military intervention against Syria. "The bill speaks of 'hostile actions' by Syria against US-led forces in Iraq," said Byrd. "I have not seen any evidence that would lead me to believe that it is the government of Syria that is responsible for the attacks against our troops in Iraq," the West Virginia Democrat said.

"Such insinuations can only build the case for military action against Syria, which, unfortunately, is a very real possibility because of the dangerous doctrine of pre-emption created by the Bush administration," said Byrd, an outspoken critic of US Middle East policy, particularly in Iraq.