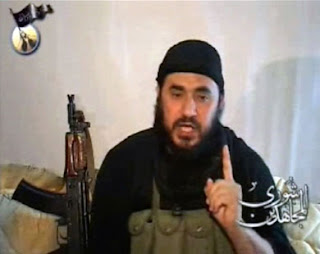 A masked insurgent carries a police flak jacket and rocket propelled grenade launcher after a police station was attacked in Mosul November 11, 2004.


An audio tape purportedly from al Qaeda ally Abu Musab al-Zarqawi urged insurgents to brace for new battles against US forces after the assault on Falluja. "The enemy... has mobilised most of its assets and potential to destroy Islam in Falluja," said the tape on Monday. "If the enemy finishes in Falluja they will move toward you, so be alert and foil this plan ... Advance toward them and rain rockets and mortars down on them," said the speaker, who sounded like Zarqawi, and who also called for attacks on U.S. supply lines in Iraq.


The authenticity of the tape, posted on a Web site often used by Islamists, could not be immediately verified. "Be cautious and foil their plan," he said, in an implicit recognition that the week-long battle in Falluja, the besieged city west of Baghdad, was virtually lost for the fighters under US assault for the past week. The message was addressed to what Zarqawi called "the heroes of Baghdad and Al-Anbar", the province which is home to Falluja, to "the lions of Mosul" in northern Iraq and the "lion cubs of Diyala, Samarra and Salahadin". "The enemy are avoiding fighting us for fear of being dispersed and of a war of attrition," and "they are weak and cannot widen the battle," it said, warning that US forces would confront one fighter stronghold after another Prolong the battle". "Don't be satisfied with repelling them from your territory... Shower them with rockets and mortar rounds," said the man claiming to be Zarqawi, apparently giving orders to his fighters.
"Cut all their supply lines, the main and secondary ones... and carry out ambushes on these routes," he said, in the message whose authenticity was impossible to verify.
Zarqawi gave implicit recognition that Falluja had fallen "Make sure that the initiative in the battle remains in your hands ... Prolong the battle because each day, for them, is worse than the one before," said the voice. "The enemy is counting on the time factor to reduce the rhythm of the battle and lessen its intensity," he said.
In a similar message posted on the internet on 12 November, a voice attributed to Zarqawi, who has a 25-million-dollar US bounty on his head, called on his fighters to resist.

The US forces has continued on Tuesday its assault on Fallujah and Mosul in the north. Col. Michael Regner, operations officer for the US Force at Falluja, said on Momday "somewhere over 1,000" insurgents had been killed in the offensive beginning on Nov. 8. He added that 38 U.S. troops had been killed and 320 wounded in the operation. Six Iraqi government troops also have been killed and 28 wounded, Regner told reporters.


He added that no more than about two dozen of the prisoners were from outside Iraq, and a senior U.S. defense official said. Regner said U.S. forces and Iraqi security troops could now "go anywhere at any time throughout that city."
"A hundred percent of the city is secure," Regner said, but added that Marines were still involved in fighting in portions of the city and were sweeping house-to-house.

Margaret Hassan, the British aid worker kidnapped in Iraq,is believed to have been murdered by her captors, a British government official said Tuesday, based on a video received by Aljazeera that showed a hooded militant shooting a blindfolded woman in the head.

In the meantime, Videotapes surfaced Tuesday purportedly showing the killing of Margaret Hassan, director of CARE International in Iraq, who was kidnapped on October 19 by a group that did not identify itself. Her family said their "hearts were broken" after hearing of her apparent death at the hands of her captors. Her Iraqi husband, Tahseen Ali Hassan, said, "I have been told that there is a video of Margaret which appears to show her murdered. The video may be genuine but I do not know. I beg those people who took Margaret to tell me what they have done with her."Arab network Al-Jazeera reported, "Al-Jazeera has obtained a video showing a masked militant shooting a blindfolded woman, who was referred to as Margaret Hassan, in the head using a handgun. Al-Jazeera decided to wait on reporting the news until it confirmed the authenticity of the tape." Al-Jazeera did not show the video.CARE, for whom Hassan had worked for more than 12 years, issued awritten statement through a spokesman. "It is with profound sadness that we have learnt of the existence of a video in which it appears that our colleague Margaret Hassan has been killed. We are shocked and appalled that this has been the apparent outcome of her abduction." Hassan, who was in her 60s, held dual British and Iraqi citizenships.British Foreign Secretary Jack Straw said, "Our experts have been examining a video which appeared to show that Margaret Hassan has been murdered, to establish whether it is genuine. "As a result of our analysis, we have today had to inform Margaret Hassan's family that, sadly, we now believe that she has probably been murdered, although we cannot conclude this with complete certainty."
News