February 26, 2014
By Dr. Haytham Mouzahem
BEIRUT, Lebanon – Late Lebanese Prime Minister Saeb Salam famously said following the 1975-1977 civil war that the conflict produced “no winner, no loser.”
This conclusion may be the best description of the new Lebanese government announced on Saturday Feb. 14 by his son, Tammam Salam, the designated Prime Minister.
Lebanon has sat without a government for 10 months and 10 days – the longest period Lebanon has been without a government in its history.
Salam’s failure to form a cabinet was due to many reasons. First was the demand of the March 8 coalition, led by Hezbollah, for one-third of the seats plus one minister with veto power. The March 14 coalition, led by the Future party, refused this demand that allows Hezbollah the potential to dismantle the government. The coalition’s ministers resigned in January 2011, causing the fall of Prime Minister Saad Hariri’s cabinet.
According to the Lebanese constitution, if one-third of the ministers plus one resigns, the government will resign, and new consultations among parliament members are required to choose the new Prime Minister. 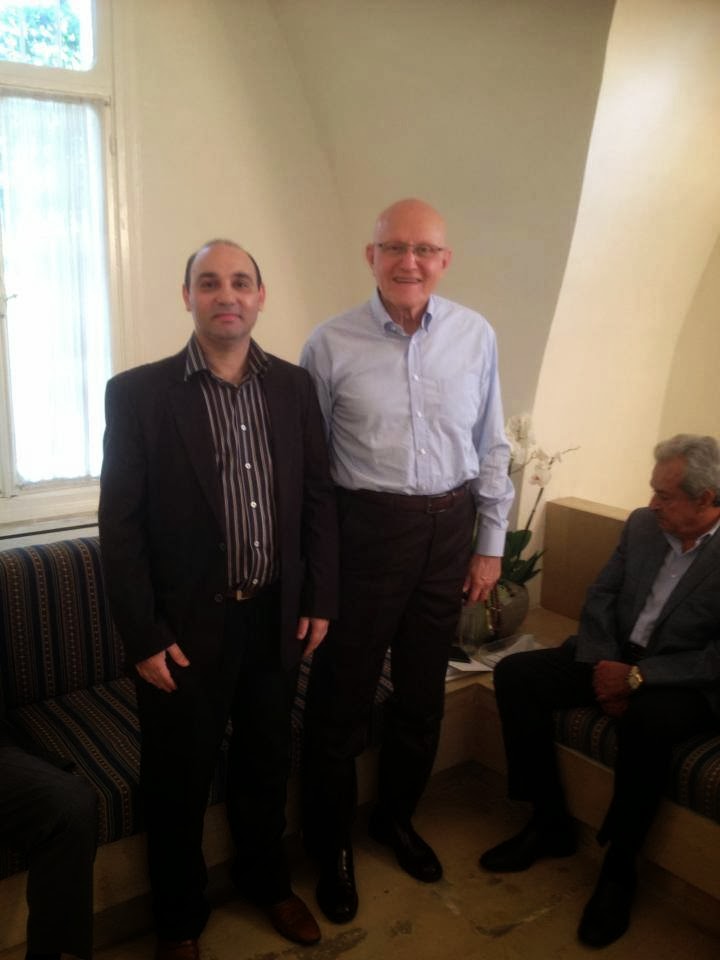 March 14 has refused to share any cabinet with Hezbollah until the Shi’a group withdraws its fighters from Syria. March 14 refused Hezbollah’s “army-people-resistance” formula in the next government’s policy statement. This formula is a way to legitimize Hezbollah’s weapons as a resistance against the Israeli occupation.
However, the Future Party, led by former Prime Minister Saad Hariri, and its allies consider that as Hezbollah’s weapons got involved in the Lebanese conflict and recently in the Syrian war, that party is no longer a resistance but a militia that should give up its arms.
Last month, Hezbollah accepted a cabinet without the “third plus one” seats and with equal distribution of 8 seats respectively to March 8, March 14, and to the centrists that include President Michel Sleiman, Prime Minister Tammam Salam and Druze leader Walid Jumblatt.
The Sunni Future party welcomed this concession from Hezbollah and accepted participation in a cabinet with the Shi’a party, despite its meddling in Syria.
Moreover, the cabinet has faced problems of distributing portfolios, especially given the rivalry between Free Patriotic Movement leader Michel Aoun and March 14 for control of the Energy Ministry. Aoun wanted his son-in-law Gebran Bassil to remain in the post (which he has held since 2009), while President Sleiman and Prime Minister Salam declared the principle of a shift or rotation of portfolios in an attempt to prevent Aoun’s movement to control the Energy and Communication Ministries.
The Ministry of Energy is important today because of the potential massive reserves of natural gas and/or oil believed to lie off Lebanon’s coast. Meanwhile, the Ministry of Communications is the best source of funding for the state.
This problem led to recent talks between the Future Party and the Free Patriotic Movement, resulting in a compromise that aligns the Ministry of Energy with another member of the Free Patriotic Movement, while Bassil received a sovereign  portfolio: the Foreign Ministry.
Another last-minute problem was Hezbollah’s refusal to appoint General Ashraf Riffi as Minister of Interior. Riffi has served as the country’s police chief and retired in 2013. Caretaker Prime Minister Najib Miqati abruptly resigned because of the March 8 ministers’ refusal to extend the Riffi’s tenure as police chief.
Miqati, who headed a government dominated by Hezbollah and its allies since June 2011, has been under pressure from Saudi Arabia and its Sunni allies in Lebanon to resign.
Thus, Hezbollah, which refused to extend Riffi’s tenure, could not accept him as Minister of Interior, the agency that controls the police and other security agencies.
A politician from the Future Party, who spoke to The Atlantic Post on condition of anonymity, said that his movement wanted to satisfy its supporters in the North, particularly in Tripoli, Miqati’s and Riffi’s town. He said the party has provided Prime Minister Salam with other potential candidates as an alternative.
In the end, Member of Parliament Nouhad Mashnouq of the Future Party was chosen as Minister of Interior and Riffi was appointed Minister of Justice.
The same source said that the objection to Riffi’s nomination came from Hezbollah and its Shi’a ally Parliament speaker Nabih Berri as an attempt to hinder the cabinet’s formation because they are worried about rapprochement between the Future Party and the Free Patriot Movement.
Lebanese analyst Ghassan Mokahal told The Atlantic Post that this rapprochement is an indication of a potential international-regional deal that could lead to an agreement on the election of Michel Aoun as a new President next May, while Saad Hariri will be the designated Prime Minister during this term.
A few months ago, a Christian Member of Parliament from the Future bloc revealed to The Atlantic Post that he believes the best solution to reassure Lebanon’s stability is to elect Aoun as a strong Maronite President and Hariri as a powerful Prime Minister, which would provide the Shi’a with a guarantee about their situation and Hezbollah’s weapons and future.
Imad Rizk, director of Al-Istishariy think tank in Beirut, told The Atlantic Post that the formation of the new cabinet is the result of an international-regional understanding to protect Lebanon from the danger of “Iraqization” following the recent suicide bombs in Beirut and Bekaa in east Lebanon.
Prime Minister Salam announced on Saturday the “government of national interest” and stressed “the need to create a positive climate for reviving the national dialogue” over controversial issues under the auspices of the President of the Republic. He added that this government will be able to create a climate for dialogue talks and hold presidential elections on time.
This cabinet is intermediary and should be replaced with a new one following the election of a new President of the country. However, this task is very complicated and needs an international, regional and local agreement on a candidate to be elected. Otherwise, this government will rule the Lebanon until the election of that President.
In June 2013, The Atlantic Post’s Middle East analyst visited designated Prime Minister Tammam Salam at home in Beirut. Mr. Salam was facing the above-mentioned problems of cabinet’s formation and would not talk to the media, preferring silence and patience until things become clear.
Prime Minister Salam, who is from a moderate historical Sunni leadership of Lebanon and notably, Beirut, has shown wisdom and patience that led to his success in forming his first cabinet. His late father Saeb Salam headed six governments during the 1950s, 1960s and 1970s.
Dr. Haytham Mouzahem is The Atlantic Post’s Middle East Analyst, based in Beirut, Lebanon.
Posted on February 16, 2014
Articles